Forty-seven years after humans first landed on the moon, much of the iconic infrastructure that helped us to get there has been demolished, re-purposed, or left to the elements.

In this episode, my guest, Roland Miller, shares experiences accumulated over twenty-five years of photographically documenting and interpreting the United States space program. His book of photography, Abandoned in Place: Preserving America’s Space History, released last February, records the remains of early space launch and research facilities across the country including the sites that launched the Gemini, Mercury, and Apollo missions.

The book approaches documenting space flight history from the first unmanned flights beyond the atmosphere to landing men on the moon through the lens of elapsed time and invites the viewer to engage with these places and objects as artist, historian, archaeologist, and explorer by pairing essays with both abstract and documentary photographs. The result is a haunting tribute to one of the greatest accomplishments of the twentieth century as well as a testament to the fleeting nature of human achievement.

Here are several of the photographs we discuss.

The launch ring pictured at the top of the post is from Launch Complex 34  and is the structure reflected in the Access Hatch photograph. Roland describes it as an oculus looking up at the sky. The orange rust against the blue contrasts the structure’s decay with the aspirations that led to the creation of the object.

This image of the launch control room at a Titan II Missile Silo is what one might imagine in a  1950s doomsday movie. Though the technology may seem antiquated to the modern eye, the space between the two chairs suggests the needed distance to prevent one person from single-handedly launching a missile. According to Roland, many of these old missile silos have been turned into underground homes. 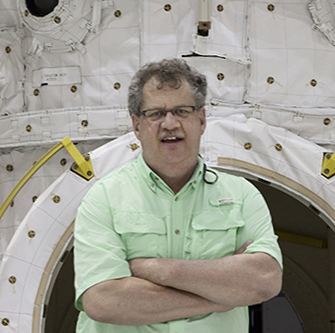 His work has been featured in numerous publications including Smithsonian Air & Space Magazine, Florida Today, Kodak’s Photo Educator International, and The New Scientist. His photographs are included in permanent collections of the Museum of Contemporary Photography in Chicago, the NASA Art Collection, and the Huntsville Museum of Fine Arts.

He currently serves as College of Lake County photography professor and dean of Communication Arts, Humanities and Fine Arts division.

Learn more about the Abandoned in Place project here and purchase your copy of the book here.